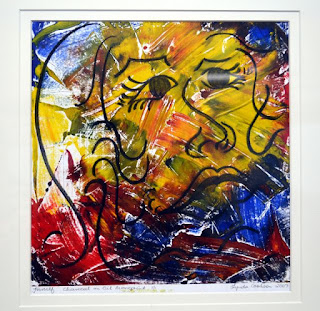 "Herself" is a charcoal line drawing on an oil monoprint. The monoprint was one of a few created during a fun printing class in Galway. The line drawing is one of a collection which evolved during a couple of life drawing sessions where the models seemed particularly grumpy on those days ... calling for humour and lightness in what I produced.

I have a few in this series, some still for sale, and will upload them as soon as I can get good images of them. It's too late now and time to throw out some of those zzzzz's before heading out in Milly the Motorhome tomorrow for a peaceful day of painting by myself in some secluded spot. I have a commission to finish ... without Bridie the German Shepherd nagging me to play by shoving her nose under my elbow and flipping my arm up at crucial painting moments!

I've just bought myself a gift! I love this little painting but it's about to be framed for sale in a gallery soon .... so I ordered a small canvas print for myself as a keepsake. 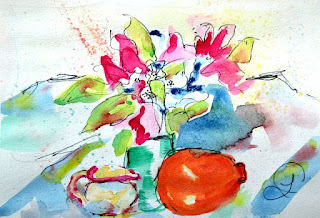 "Companions"
It's a funny thing but I often find that once a painting is complete it seems to have a life and identity of its own, separate to me. Not always, but often. While paintings are in process they are very much me, my expression, my moods, my expectations and my skills ... but once it is complete sometimes I view it as if it was created by someone else. Hmmm, I think I must take more notice of this in future and try and work out with which paintings, perhaps with which mediums, I am able to do this.

Do other artists notice this I wonder?

"Wisteria" is an oil study on brown wrapping paper. It's one of four studies which hang on my office wall and which came into existence during a demo day in Hitchin in the UK, 2014. Unfortunately only half the image is visible on this blog page ... you'll have to click it to see the whole image. Sorry about that.

I have no idea why I named it "Wisteria" and was reminded of it only by flipping through images this evening ... but somehow the name fits.

It's very liberating and one of the best exercises an artist can do, to simply work on a poor quality surface (being brown wrapping paper) letting go of any inhibitions and reserves within you, knowing that if you make a mess then not much is wasted.

You can draw on whatever patterns, memories, shapes or feelings which surface during the process and trust your instinct that you will put them in the place which is "right" for them ... even if you're feeling rebellious and hoping to create disharmony or discordance. You'll know when to stop working on a study when, after  you've gone through the bad hair day moment you begin to hesitate and question whether you've done enough or not. Or maybe you'll be lucky and without hesitation at all say Enough, 'tis done.

Irish sheep ... so many to count they kept me awake!

I've just finished painting a whole fleecing flock of Irish sheep ... enough to send me to sleep for the next decade! 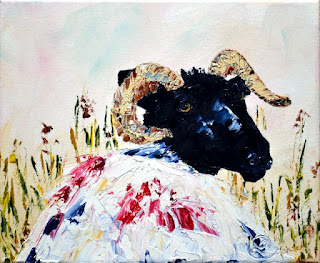 "Caitroina" which means Chaste and Pure in Irish

For thirteen years we lived with the hardy, black-faced, long-fleeced sheep which Connemara in the West of Ireland is so famous for.

They're hilarious to drive behind on narrow Irish boreens (little farm track roads) and you can't help but giggle at their wobbly behinds and woolly tails as they run ahead of you, bumping into each others behinds as you herd them along, looking for a friendly and convenient farm gate or siding to huddle into. If all traffic jams were this humorous road rage would be a total unknown. 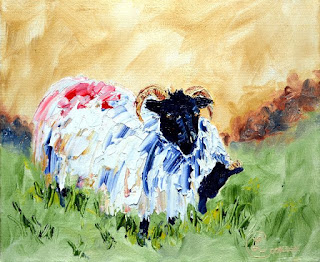 Come February, in the area we lived in, lambing season arrives and mornings become filled with murderous sounds as the farmer trudges into the field with buckets of feed. The noise can be quite incredible with no two sheep or lambs having the same pitch, tone, warble, gurgle or bleat - but all of them have a high degree of drama. Peaceful mornings erupt in a cacophony of sounds and you'd swear they were all being murdered in cold blood. A quick look out the window is reassuring that they're only hurtling down the mountainside or across the field in noisy hunger. 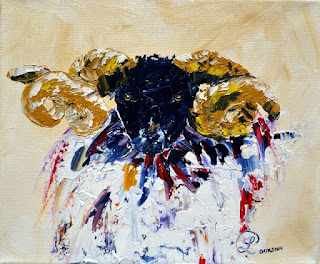 There's not much that can match the attitude of these woolly wonders with their large burnt-orange eyes that glow in your headlights at night. But ... more about these characterful creatures another time when more sheep need to be painted!

The rest of the flock can be found on my Facebook page.

This is Brendan. He's brand new ... despite the apparent age and experience showing on his horns. Well, he's fresh off my palette knife anyway. And he's almost ready to be on his way to Gallery 1608 in Bushmills, Northern Ireland. He's just waiting to be framed, after which he and his 3 mates, also waiting to be framed, will be packaged up and sent northwards to that famous town where excellent whiskey is distilled, and where Ian Bickerstaff and Gallery 1608 are becoming more and more well known. 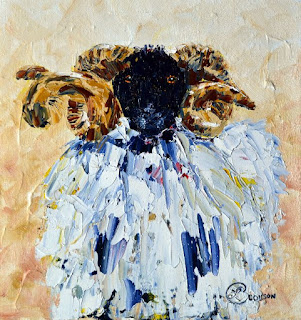 "Brendan" by Lynda Cookson
I have a reputation for enjoying the strength of sound, and uniqueness, of many Irish names so it's no surprise at all that my hardy, black-faced sheep, found everywhere in the farmlands of Ireland, are aptly named. (My lovely long-haired German Shepherd is named Bridie, short for Bridget)

Possibly more sheep pics later ... four of them are Bushmills bound with another seven going to the gallery All Things Connemara in Clifden, Co Galway. 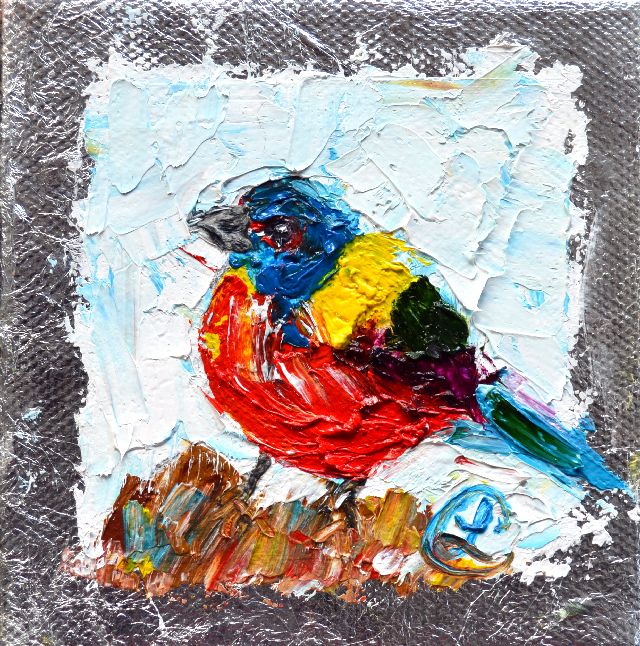 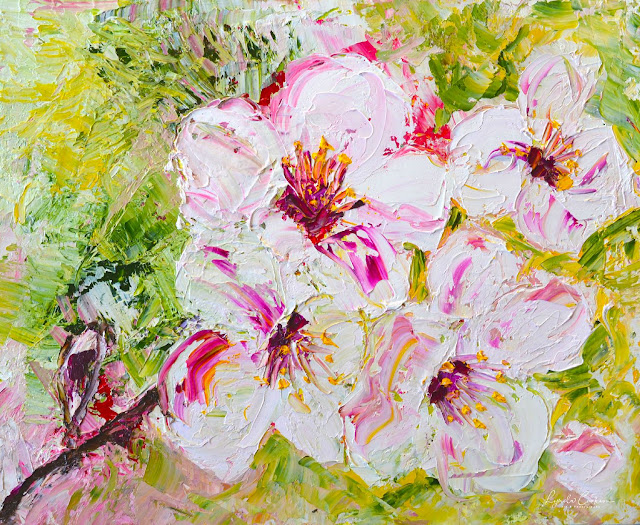